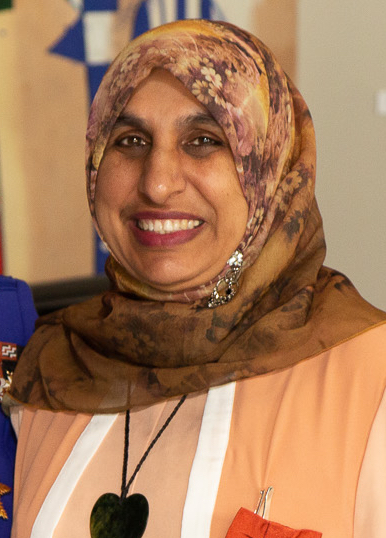 Anjum Nausheen RahmanMNZM (born 16 July 1966) is a New Zealand Muslim community leader and human rights activist. She is an advocate for the rights of Muslim women.[1]

Rahman was born on 16 July 1966 in the village of Mahuwara in the Indian state of Uttar Pradesh.[2] Her family moved to New Zealand from Canada in 1972 when she was five years old, after her father completed a PhD and was offered a post-doctoral position at the Ministry of Agriculture and Fisheries in Hamilton.[3][4] She became a naturalised New Zealand citizen in 1976.[2]

In response to the attacks, Rahman established the Inclusive Aotearoa Collective to combat discrimination.[3][8] She made submissions and presentations to a parliamentary select committee on behalf of the Islamic Women’s Council in support of gun law changes, saying that the tightening of those laws would prevent violence towards vulnerable communities.[9]

Since 2017 Rahman and the Inclusive Aotearoa Collective have advocated for a national strategy for inclusion and anti-discrimination.[10][11]